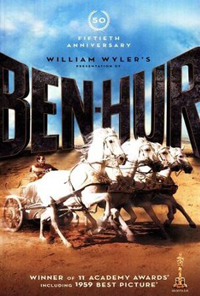 In A.D. 26, Judah Ben-Hur is a wealthy Jewish prince and merchant in Jerusalem, living with his mother, Miriam, and his sister, Tirzah. The family’s loyal slave, the merchant Simonides, pays a visit with his daughter, Esther. Seeing each other for the first time since childhood, Judah and Esther fall in love, but she is betrothed to another. After several years away from Jerusalem, Judah’s childhood friend Messala returns as commander of the Fortress of Antonia. Messala believes in the glory of Rome and its imperial power, while Judah is devoted to his faith and the freedom of the Jewish people. This difference causes tension between the friends, and results in their split after Messala issues an ultimatum demanding that Judah deliver potential rebels to the Roman authorities. Soon, Judah incurs the wrath of his childhood friend, now a Roman tribune. Although forced into slavery on a galley and compelled to witness the cruel persecution of his family, he survives, harboring dreams of vengeance. A battle at sea and a chariot race are among the memorable sequences. The film used 300 sets at Rome’s Cinecitta Studios and won a record 11 Oscars.