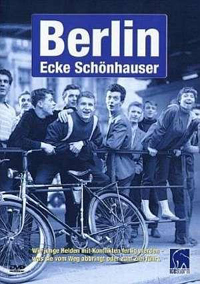 Berlin Schönhauser Corner is the story of four aimless young people. Dieter (Ekkehard Schall) is the oldest of the bunch, and, as the brother of a policeman, he gets away with more than most of his comrades. Angela (Ilse Pagé) is a restless young woman who is sweet on Dieter. Kohle (Ernst-Georg Schwill) is the hapless little friend who adores Dieter and stays away from home to avoid being beaten by his stepfather. Karl-Heinz (Harry Engel) is the bad egg in the bunch, and clearly the product of a more privileged upbringing. When things get too hot for them in the east, Dieter and Kohle flee over the border to the west, only to find that things there are no bed of roses either.

Ranked by film critics among Germany’s 100 Most Important Films, this Kohlhaase-Klein collaboration makes an important contribution to the international youth film genre. One of the “Berlin Films” made by Klein and scriptwriter Wolfgang Kohlhaase, this film was part of the Rebels with a Cause: The Cinema of East Germany series, screened at The Museum of Modern Art in New York in 2005.