Between Pancho Villa and a Naked Woman 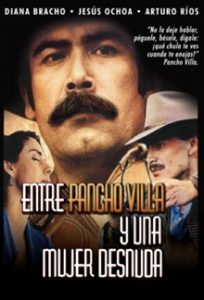 Gina (Diana Bracho) is a modern business woman in her late forties.  She has a lover named Adrian, whom she sees once in a while just to have sex.  They are both attracted to the historic figure of Pancho Villa, and while he admires Villa’s power, she admires his virility. As Gina helps Adrian (who is a journalist) to write a book about Pancho Villa, she begins to recognize a similarity between Villa’s relationship with women and the one between Adrian and herself. Eventually Gina tires of the purely sexual relationship, and when she decides to marry Adrian and have a baby, he goes out to buy cigarettes and disappears for three months. Over time, Gina forgets about Adrian and finds a new boyfriend (half her age).  When Adrian tries to get her back, she refuses and humiliates him, prompting him to assume the role of Pancho Villa ready to do anything to get Gina back.