Beware of the Car 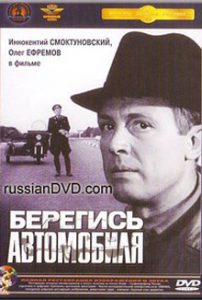 Yuri Detochkin (Smoktunovsky) is a humble Soviet insurance agent who steals cars from corrupt Soviet officials in a manner akin to Robin Hood, disappointed by the militsiya being unable to fight them efficiently. One of the Detochkin’s victims is Dima Semitsvetov (Mironov), a retail embezzler mocked but tolerated by his colorful father-in-law Semyon Vasilyevich (Papanov), a retired Soviet Army officer.

Detochkin sells some stolen cars and anonymously transfers the money to the accounts of various orphanages. Detective Maxim Podberyozovikov (Yefremov) investigates his crimes and tries to prosecute him, but faces a serious moral problem in doing so, partly because the suspect appears to be his amateur theater mate and friend.