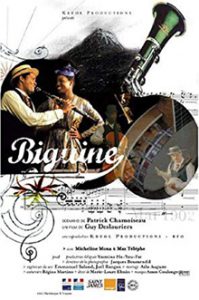 Biguine takes place in Martinique at the end of the 19th century.  Abandoning the plantation where they work, Hermansia and Tiquitaque, a pair of musicians, decide to settle in Saint Pierre, the cultural center of the Caribbean at that time. The two intend to make a living with their music. But they’re quickly brought down to earth. In Saint Pierre, Western music is all the rage and their plantation “folklore” falls on deaf ears.  And so begins a long period adrift during which the pair discovers these new sounds that have come from another world.