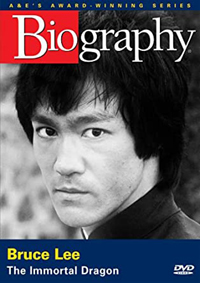 He fought his way from the mean streets of Hong Kong to international superstardom. With blazing fists and a burning passion, he became one of the most celebrated kung-fu masters of all time. In classic films like Fists of Fury and Enter the Dragon, he created the martial arts action genre that has become a favorite of moviegoers worldwide. But just as he reached the height of fame, he was struck down by a mysterious ailment or was it the curse that supposedly follows his family? This fascinating program examines the short, meteoric life of Bruce Lee. Exclusive interviews with friends and family including his late son Brandon and extensive footage from home movies, screen-tests and his legendary films help reveal the man behind the myth of the Immortal Dragon.