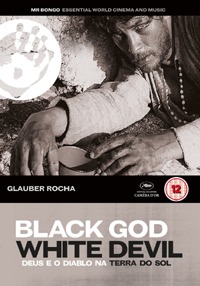 During yet another drought-blighted year in the sertão, the arid hinterland of the north-east Brazil, ranch hand Manoel kills his boss after a dispute over money. Manoel and his wife Rosa flee, but instead of finding freedom and happiness, or at least expiation, the pair fall prey in succession to the whims of a black preacher who operates far outside the orbit of the Catholic Church.  The two end up running from one allegiance to another, following the words of others as they attempt to find a place in their ruthless land. Blending mysticism, religion, and popular culture in this symbolic and realistic drama, Rocha insists that rather than follow the external and obscure dogmas of culture and religion, man must determine his path by his own voice.