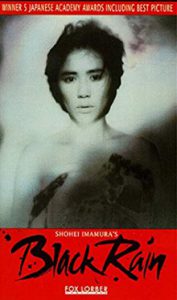 Mr. and Mrs. Shizuma, and their niece Yasuko, make their way through the ruins of Hiroshima, just after the atomic bomb has dropped. Five years later, Yasuko is living with her aunt and uncle, and her senile grandmother, in a village containing many of the bomb survivors. Yasuko does not appear to be affected by the bomb, but the Shizuma’s are worried about her marriage prospects, as she could succumb to radiation sickness at any time.