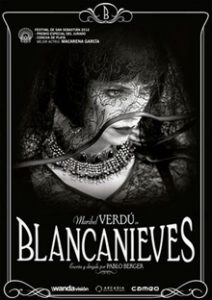 A band of bullfighting dwarfs save the life of a young woman with amnesia. They end up taking her under their wing when they find out that she has seemingly natural skills as a bullfighter, upon which they can capitalize not only for their act but for her own personal gain. As she does not know her name or background, the dwarfs call her Blancanieves, after the famed fairy tale. What they are all unaware of is that she is really Carmen, the daughter of the once great matador, Antonio Villalta. On the day Carmen was born, her father suffered a career ending accident, and her mother died in childbirth. Her father quickly remarried his nurse, the evil Encarna. Although raised by her grandmother during her early years, Carmen, following the death of her grandmother, went to live with Encarna while an adolescent, Encarna who treated her as a slave. Carmen eventually found her disabled father, who was hidden away and treated poorly by Encarna.