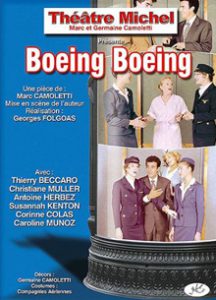 American playboy Bernard Lawrence has cleverly designed a system using the airline timetables to keep three affairs going with three different flight attendants. However, his life soon starts to descend into a shambles after the arrival of a friend, Robert Reed, who schemes to take over Bernard’s apartment, girls, housekeeper and job while manipulating Bernard into taking a new job in New York,  and a dreaded change to the flight schedules, whereby it becomes increasingly difficult to keep his three fiancées apart.