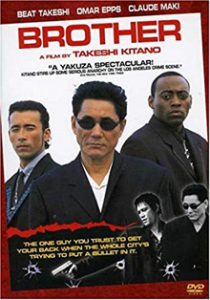 Yamamoto (Takeshi Kitano) is a brutal and experienced Yakuza enforcer whose boss was killed and whose clan was defeated in a criminal war with a rival family. Surviving clan members have few options: either to join the winners, reconciling with shame and distrust, or to die by committing seppuku. Yamamoto, however, decides to escape to Los Angeles along with his associate Kato (Susumu Terajima). There he finds his estranged half-brother Ken (Claude Maki), who runs a small-time drug business together with his local African-American friends. At the first meeting, Yamamoto badly hurts one of them, Denny (Omar Epps), for an attempt to defraud him. Later, Denny becomes one of the Yamamoto’s closest friends and associates.

Used to living in a clan and according to its laws, Yamamoto creates a hapless gang out of Ken’s buddies. The new gang quickly and brutally attacks Mexican drug bosses and takes control of their territory in LA. They also form an alliance with Shirase (Masaya Kato), a criminal leader of Little Tokyo district, making their group even stronger. As time passes, Yamamoto and his new gang emerge as a formidable force, gradually expanding their turf to such an extent that they confront the powerful Italian Mafia.  However, the Mafia ruthlessly strikes back, and soon Yamamoto and his gang are driven into a disastrous situation of no return as they are hunted down one by one.