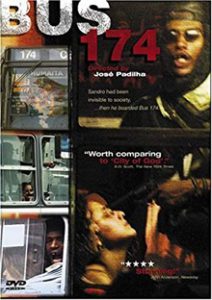 This documentary depicts what happened in Rio de Janeiro on June 12th 2000, when bus 174 was taken by an armed young man, threatening to shoot all the passengers. Transmitted live on all Brazilian TV networks, this shocking and tragic-ending event became one of violence’s most shocking portraits, and one of the scariest examples of police incompetence and abuse in recent years.