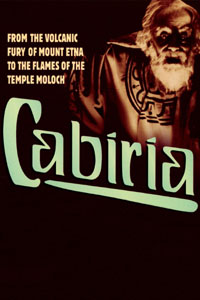 Young Sicilian girl Cabiria (Lidia Quaranta) and her nurse, Croessa (Gina Marangoni), survive a devastating volcanic eruption, only to be taken by Phoenicians to Carthage. As the second of the Punic Wars rages between Carthage and Rome, the pair is sold into slavery, and Cabiria is intended as an offering to the god Moloch and the child-eating statue Kronos. Croessa convinces Roman Fulvius Axilla (Umberto Mozzato) to rescue Cabiria, yet afterward the girl remains in slavery for another decade.  With meticulous care given to costume and set design, Cabiria was shot in North Africa, Sicily and the Italian Alps, and set the standard for big-budget feature-length movies around the world opening the way for D.W. Griffith and Cecil B. De Mille.