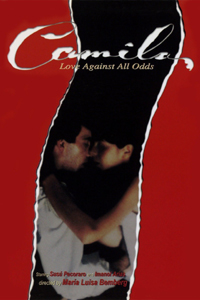 Camila O’Gorman (Susú Pecoraro) defies her prominent and politically-connected Buenos Aires family by publicly criticizing the Argentine dictator Juan Manuel de Rosas. When she meets Father Ladislao Gutierrez (Imanol Arias), who preaches against the dictator’s death squads from his pulpit, she falls deeply in love with the man of God, further outraging her father, Adolfo (Héctor Alterio). Hounded by both the church and the state, the couple must decide to flee or to stand their moral ground.  The two later escape to a far off, secluded village where they assume new identities as husband and wife and begin running a children’s school. After several months of relative happiness, the couple’s identity is discovered by a local priest. Under moralistic pressure from both Camila’s family and the Catholic church the authorities apprehend the lovers, and imprison them for sacrilege.