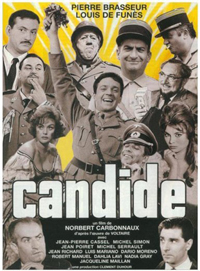 The film follows the adventures of Candide, an orphaned Westphalian brought up in a baron’s chalet. He falls in love with the baron’s daughter, Cunégonde, and is thrown out of the house when the baron discovers them kissing. When war breaks out in 1939, Candide is drafted and then captured by the Nazis, but escapes and joins the International Red Cross. Candide’s improbable adventures take him into a concentration camp to rescue his tutor, Pangloss; then he is off to South America (where he endures a series of revolutions), Borneo (where he is imprisoned by a primitive tribe), Moscow (where he accidentally foments a missile crisis between the Soviet Union and the United States), and New York (where he gets mixed up in a racial clash). Finally, back in France, he retires to a country house with Cunégonde, Pangloss, and a mysterious lady who saved him from a firing squad, and settles down to write his memoirs