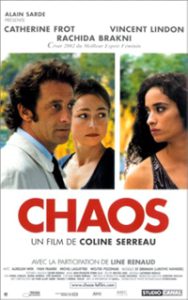 In “Chaos,” Serreau opens a new front, directing a furious cross-cultural barrage at male abuse. The plot centers on Paul and Helene, two well-fixed Parisians who are en route to a dinner party when they witness Malika, a young prostitute, getting beaten by a pack of lowlifes just outside their car. As Malika is left for dead, Paul locks the doors and speeds off. After guilt prompts Helene to track down Malika in the hospital, she puts her own life on hold to help her recover and the pair team up to inflict misery on the men who have brutalized them. The film includes a long — some would say implausible — flashback recounting the Algerian Malika’s past as a girl who fled an arranged marriage, got hooked by heroin on prostitution, and fought her way clear by mastering stock market speculation and selling herself to a besotted billionaire.