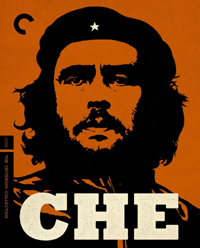 Che is a two-part 2008 biographical film about Argentine Marxist revolutionary Ernesto “Che” Guevara, directed by Steven Soderbergh. Rather than follow a standard chronological order, the films offer an oblique series of interspersed moments along the overall timeline. Part One is titled The Argentine and focuses on the Cuban Revolution from the landing of Fidel Castro, Guevara, and other revolutionaries in Cuba to their successful toppling of Fulgencio Batista’s dictatorship two years later. Part Two is titled Guerrilla and focuses on Guevara’s attempt to bring revolution to Bolivia and his demise. Both parts are shot in a cinéma vérité style, but each has different approaches to linear narrative, camerawork and the visual look. It stars Benicio del Toro as Guevara.

Steven Soderbergh’s film about Che Guevara is a fascinating exploration of the revolutionary as icon. Daring in its refusal to make the socialist leader into an easy martyr or hero, Che paints a vivid, naturalistic portrait of the man himself, from his overthrow of the Batista dictatorship to his 1964 United Nations trip to the end of his short life. Composed of two parts, the first a kaleidoscopic view of the Cuban Revolution and the second an all-action dramatization of Che’s failed campaign in Bolivia, Che is Soderbergh’s most epic vision.