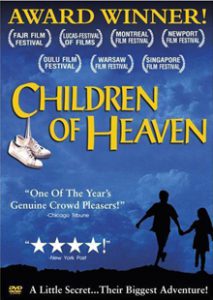 Children of Heaven is a 1997 Iranian family drama film written and directed by Majid Majidi. It deals with a brother and sister and their adventures over a lost pair of shoes. It was nominated for the Academy Award for Best Foreign Language Film in 1998.

When young Ali (Amir Farrokh Hashemian) accidentally loses the only pair of shoes his little sister Zahra (Bahare Seddiqi) owns, the siblings attempt to hide the bad news from their poverty-stricken father (Mohammad Amir Naji) and ill mother (Fereshte Sarabandi). They devise a scheme to share Ali’s own pair of worn sneakers until they can find a new pair of shoes for Zahra. This documentary-like film was shot on location in some of Tehran’s poorest areas.