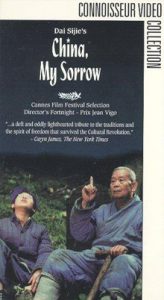 In August 1966, the Cultural Revolution in full swing, 13-year-old Tian Ben is arrested for playing a pop record; he’s sent to a remote mountain camp in Niu-Peng. There he’s called “Four Eyes” and, with about 16 other older boys and men, he’s made to carry muck up a mountainside, make bricks, saw logs, and sing daily to Chairman Mao of his faults. There’s camaraderie among the five youths, especially with a young pickpocket named Baimao, and Tian is also drawn to a silent monk who cares for him when he falls ill and the others expect him to die. The camp is remote, so there are no fences or walls. Tian longs to escape.