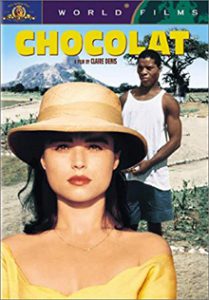 An affluent white woman named France (Mireille Perrier) returns to her childhood home in Cameroon after many years of living in France. While there, she reflects upon her youth. When she was growing up in the former French colony in the 1950s, her life was one of privilege, escape and ignorance. She bonded with an African servant named Protée (Isaach De Bankolé), even though she was unaware of the larger racial and social tensions stirring all around her.

The title Chocolat comes from the 1950s slang meaning “to be cheated”, and thus refers to the status in French Cameroon of being black and being cheated; it is also an allusion to Protée’s dark-brown skin and the racial fetishism of Africans by Europeans. Towards the end of the film, France’s father reveals a central theme of the film as he explains to her what the horizon is. He tells her that it is a line that is there but not there, a symbol for the boundaries that exist in the country between rich and poor, master and servant, white and black, colonizer and colonized, male and female; a line that is always visible but impossible to approach or pass.