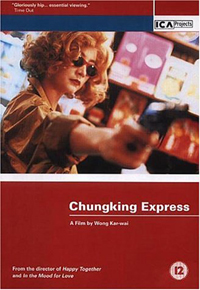 Chungking Express is a 1994 Hong Kong romantic crime comedy-drama film written and directed by Wong Kar-wai. The film consists of two stories told in sequence, each about a lovesick Hong Kong policeman mulling over his relationship with a woman. The first story stars Takeshi Kaneshiro as a cop obsessed with his breakup with a woman named May, and his encounter with a mysterious drug smuggler (Brigitte Lin). The second stars Tony Leung as a police officer roused from his gloom over the loss of his flight attendant girlfriend (Valerie Chow) by the attentions of a quirky snack bar worker (Faye Wong).

“Chungking Express tells its story of love, loss, and memory through the romance of goods”. In the first story, He Qiwu desires closer social contacts but can only depend on desperate phone calls to May’s parents and cans of pineapples (May’s favourite food) as substitutes for actual physical and emotional contact and intimacy.