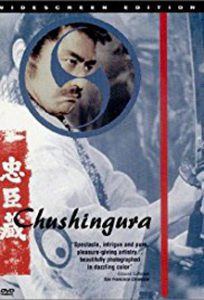 A young lord attempts to combat the corruption endemic to the Shogunate bureaucracy, only to be placed in an impossible conflict of duties. He refuses to pay the “customary” bribe expected by a Chancellor sent from the Shogunate to teach him the etiquette for receiving envoys from the Emperor. In revenge, the Chancellor goads the lord into drawing his sword when the envoys are present, a crime punishable by death. The young lord is forced to commit ritual suicide for this crime. His vassals are ordered to turn over their lord’s estate for confiscation, forbidden to take revenge for their lords death, then disbanded as a clan. To obey the Shogun, the lord’s former samurai must follow those orders, but to be loyal to oaths they swore to their lord and have justice, they must avenge him. This conflict of obligations is the primary dilemma in Japanese society, which is why this story is considered their national epic. The story is richly woven and the film worth seeing for the gorgeous art.