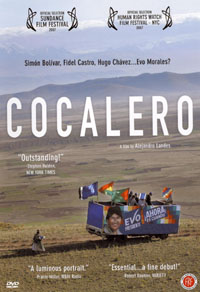 In 2005, Evo Morales, an indigenous Indian and labor leader in Bolivia, became an international news story when he ran for president of his troubled country. Miami-based filmmaker Alejandro Landes headed to South America to shoot this verite-style documentary, which tracks Morales’ remarkable 80-day campaign. Landes’ bare-bones film provides a compelling fly-on-the-wall look at Morales’ remarkable rise to power, from his days as a “cocalero,” or cocoa farmer, to the presidency.