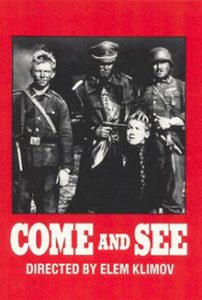 Come and See is a 1985 Soviet anti-war film directed by Elem Klimov and starring Aleksei Kravchenko and Olga Mironova.  The film’s plot focuses on the Nazi German occupation of Belarus, and the events as witnessed by a young Belarusian partisan teenager named Flyora, who—against his mother’s wishes—joins the Belarusian resistance movement, and thereafter documents the Nazi atrocities and human suffering inflicted upon the Eastern European villages’ populace. The film mixes hyper-realism with an underlying surrealism, and philosophical existentialism with poetical, psychological, political and apocalyptic themes.