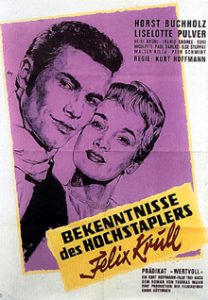 Confessions of Felix Krull is a 1957 West German comedy and drama film directed by Kurt Hoffmann and starring Horst Buchholz, Liselotte Pulver, and Ingrid Andree. It is based on the 1954 novel of the same title by Thomas Mann.  This adaptation of Thomas Mann’s unfinished novel tells the fantastic story of Felix Krull that improves on Thomas Mann’s story of a charming young conman. Horst Buchholz, in the star-making titular role, makes it easy to understand how Felix can charm his victims into bed and out of jewelry.  The film’s final third is funnier than Mann’s and wraps up the original’s loose ends.