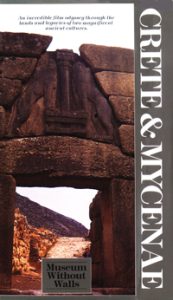 Over a hundred years ago, just above the rich plain of Argos on the site of Homer’s “golden Mycenae,” archaeologist Heinrich Schliemann unearthed the massive and fabled Lion Gate, leading him to pronounce that he had found the graves of Agamamnon and his companions.  His discovery was to add yet another piece to one of the most fascinating and mysterious archaeological puzzles of our time.

This highly acclaimed documentary, filmed on the island of Crete and at Mycenae on the Greek mainland, unveils the findings of Schliemann and countless others who went before and after him.  It explores the cultural and historical connections between the rich Minoan civilization and neighboring Mycenae, probes the palatial archaeological findings at Knossos, and preserves brilliantly on film the beauty and intensity that characterized these two magnificent ancient cultures.