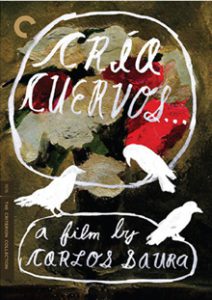 Set almost entirely in a large, gloomy house walled up against the chaotic life of Madrid outside, Cría cuervos tells the story of eight-year-old Ana, played by Ana Torrent. After the harrowing death of her mother (played by the compellingly neurotic Chaplin), Ana finds her philandering father dead in bed with a married lover. Frosty Aunt Paulina arrives to look after the young girl and her two sisters. The all-female household is completed by the children’s grandmother, mute and immobile in a wheelchair, and the feisty, fleshy housekeeper, Rosa (veteran character actress Florinda Chico), who fills Ana in on the mysteries of sex.

But this relatively simple premise tells us little about the experience of watching the film. For as Cría cuervos‘s apparently uneventful narrative unfolds, the dead parents continue to intrude unpredictably in the present, as does the adult Ana, also played by Chaplin, who speaks from the then distant 1995.