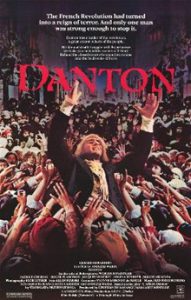 Action opens in November of 1793, with Danton returning to Paris from his country retreat upon learning that the Committee for Public Safety, under Robespierre’s incitement, has begun a series of massive executions, The Terror. Confident in the people’s support, Danton clashes with his former ally, but calculating Robespierre soon rounds up Danton and his followers, tries them before a revolutionary tribunal and dispatches them to the guillotine.