The Miracle of Bern 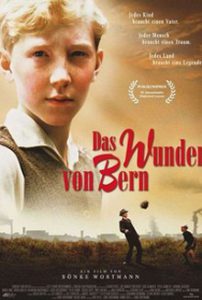 The Miracle of Bern is a 2003 film by Sönke Wortmann, which tells the story of a German family (particularly of a young boy and his depressed ex-POW father) and the unexpected West German miracle victory in the 1954 World Cup Final in Bern, Switzerland.  The film can be regarded as a portrait of post-war Germany.