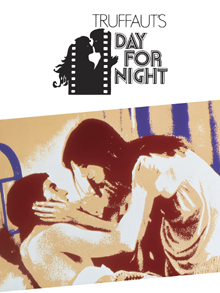 A film director (François Truffaut) tries to get his movie made while observing the real-life dramas in his actors’ lives. Fading icon Severine (Valentina Cortese) forgets her lines when she drinks, while her co-star, Alexandre (Jean-Pierre Aumont), is fixated on his lover’s imminent arrival. Meanwhile, insecure young star Alphonse (Jean-Pierre Léaud) has emotional outbursts, yet seems well-balanced compared to Julie (Jacqueline Bisset), a British actress recuperating from a nervous breakdown.

La Nuit américaine, is the French name for the filmmaking process whereby sequences filmed outdoors in daylight are shot with a filter over the camera lens (a technique described in the dialogue of Truffaut’s film) or also using film stock balanced for tungsten (indoor) light and underexposed (or adjusted during post-production) to appear as if they are taking place at night. In English, the technique is called day for night.