Death and the Compas 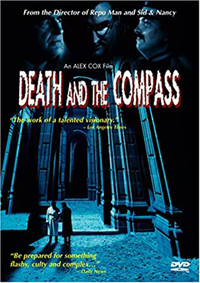 Death and the Compass is a 1992 American thriller film written and directed by Alex Cox, based on Jorge Luis Borges’ 1942 short story of the same name.  In the story, a detective, Erik Lönnrot, attempts to solve a mysterious series of murders which seem to follow a kabbalistic pattern. Appearances are misleading, however. By following what seem to be clues, the detective falls victim to his belief in abstract reason and to the man whom he presumes to be a criminal mastermind. In this way, “Death and the Compass” both observes and inverts the conventions of detective fiction.

This film is in English.