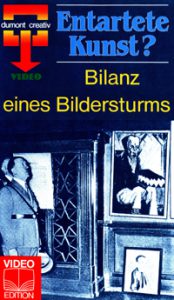 Degenerate art (Entartete Kunst) was a term adopted in the 1920s by the Nazi Party in Germany to describe modern art. During the dictatorship of Adolf Hitler, German modernist art, including many works of internationally renowned artists, was removed from state-owned museums and banned in Nazi Germany on the grounds that such art was an “insult to German feeling”, un-German, Freemasonic, Jewish, or Communist in nature. Those identified as degenerate artists were subjected to sanctions that included being dismissed from teaching positions, being forbidden to exhibit or to sell their art, and in some cases being forbidden to produce art.

Degenerate Art was also the title of an exhibition, held by the Nazis in Munich in 1937, consisting of 650 modernist artworks chaotically hung and accompanied by text labels deriding the art. Designed to inflame public opinion against modernism, the exhibition subsequently traveled to several other cities in Germany and Austria.

While modern styles of art were prohibited, the Nazis promoted paintings and sculptures that were traditional in manner and that exalted the “blood and soil” values of racial purity, militarism, and obedience.  Similar restrictions were placed upon music, which was expected to be tonal and free of any jazz influences; disapproved music was termed degenerate music. Films and plays were also censored.