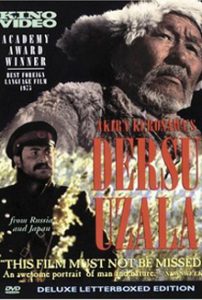 Dersu Uzala: The Hunter is a 1975 Soviet-Japanese co-production film directed by Akira Kurosawa, his first and only non-Japanese-language 70mm film.

The film is based on the 1923 memoir Dersu Uzala (a native trapper) by Russian explorer Vladimir Arsenyev, about his exploration of the Sikhote-Alin region of the Russian Far East over the course of multiple expeditions in the early 20th century. Shot almost entirely outdoors in the Russian Far East wilderness, the film explores the theme of a native of the forests who is fully integrated into his environment, leading a style of life that will inevitably be destroyed by the advance of civilization. It is also about the growth of respect and deep friendship between two men of profoundly different backgrounds, and about the difficulty of coping with the loss of strength and ability that comes with old age.