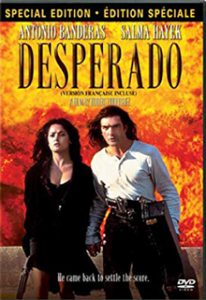 Desperado is a 1995 American neo-Western action film written, produced, and directed by Robert Rodriguez. It is the second part of Rodriguez’s Mexico Trilogy.  Mariachi (Antonio Banderas) plunges headfirst into the dark border underworld when he follows a trail of blood to the last of the infamous Mexican drug lords, Bucho (Joaquim de Almeida), for an action-packed, bullet-riddled showdown. With the help of his best friend (Steve Buscemi) and a beautiful bookstore owner (Salma Hayek), the Mariachi tracks Bucho, takes on his army of desperados, and leaves a trail of blood of his own.