Destiny Has No Favorites 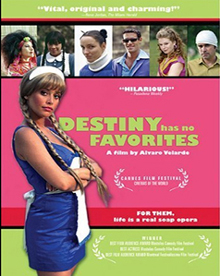 Ana (Monica Steuer), a spoiled Peruvian socialite, is incensed when her husband rents out the grounds of his palatial mansion to a production company filming a soap-opera. In her dull solitude, Ana follows the shooting from her window, and soon becomes just as engrossed in the soap-opera as her two maids. When accidentally mistaken for an actress, she ends up being cast for a role – to the great dismay of the other actresses and her maids. The set soon becomes dominated by gossip, intrigue and blackmail, while the boundary between her real world and the make believe world of soap-operas begins to blur. Ana finds herself entangled in a real life soap-opera all of her own when she tries to get everything back to normal before her husband comes home.