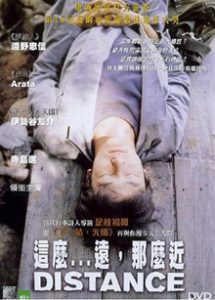 Three years ago, members of a cult sabotaged Tokyo’s water supply, killing hundreds and poisoning thousands, before committing mass suicide on the outskirts of town and having their ashes supposedly dispersed by a lake. On the anniversary of the attack, four members of the families of the perpetrators make the trek to that lake to remember them. When they arrive, they find a motorcycle parked there. At the dock, they see a former member of the cult, Sakata, who had trained for the attack but had defected at the last minute. He is distant and doesn’t interact with them.

At the end of the day, they return to their vehicle only to find it missing. While they are discussing what to do as night approaches, Sakata comes and, finding that his motorcycle is also missing, leads them to the cabin where he and the deceased cult members stayed prior to the attack, and they spend the night reminiscing about people they have known and lost. Flashbacks illuminate the moments when the cult members told their families about leaving the real world to join the cult, Sakata’s time with the cult and eventual escape, and the ensuing police investigation after the attack.  The film’s exploration of loss and the gulf of time and memory that separates us from our pasts is beautifully and subtly handled by Koreeda.