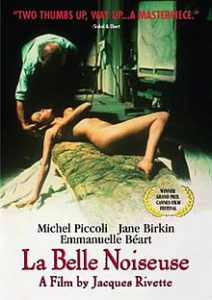 Jacques Rivette’s “Divertimento” is a real cinematic curiosity. It’s an alternate version of a film widely considered one of the director’s best: The spellbinding 1990 “La Belle Noiseuse,” a four-hour study of art, painting, fear and desire with Michel Piccoli as an aging, re-inspired painter and Emmanuelle Beart as his stunning, emotionally torn model. It follows the study of an old artist rediscovering his talent, and a young girl opening up to herself through modeling for him.