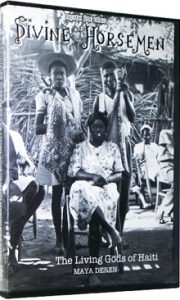 Divine Horsemen: The Living Gods of Haiti (1954) is a black-and-white documentary film of approximately 52 minutes. It is about dance and possession in Haitian vodou that was shot by experimental filmmaker Maya Deren between 1947 and 1954.  In 1981, twenty years after Deren’s death, the film was completed by Deren’s third husband Teiji Ito (1935-1982) and his wife Cherel Winett Ito (1947-1999). Most of the film consists of images of dancing and bodies in motion during rituals in Rada and Petro services. The resulting film reflected Deren’s increasing personal engagement with vodou and its practitioners (Wilcken, 1986). While this ultimately resulted in Deren disregarding the guidelines of the fellowship, she was able to record scenes that probably would have been inaccessible to other filmmakers.