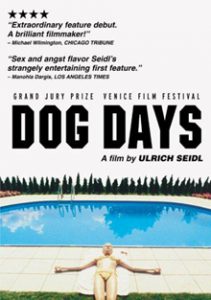 Summer in Vienna is the backdrop for intersecting anecdotes about six locals. Anna (Maria Hofstätter), a compulsive hitchhiker, travels to shopping malls with strangers. A widower (Erich Finsches) asks a cleaning woman to strip for him. A divorced man and woman who still live together try to make each other miserable. A teacher (Christine Jirku) suffers violence at the hands of her boyfriend. These different people live out unfulfilled existences, attempting to muffle their isolation.  The film is characterized by a disturbing naturalistic style which is a trademark of Seidl’s directing. It stars a mix of professional and amateur actors and it became mildly controversial for its depiction of unsimulated sex.