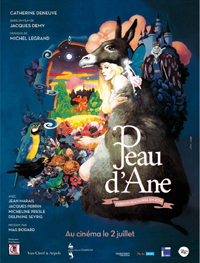 In a magical, faraway land, a widower king (Jean Marais) decrees that he will wed his daughter, the princess (Catherine Deneuve), because she’s the only woman able to match his former queen’s beauty. To dodge the incestuous union, the princess — with the help of a magical fairy (Delphine Seyrig) — disguises herself as a donkey and escapes to a neighboring kingdom. There, the donkey-skinned maiden encounters a handsome prince (Jacques Perrin) who falls in love with her.