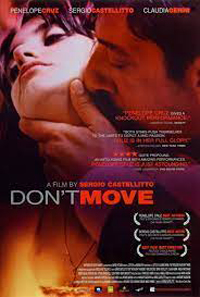 A prominent surgeon waits anxiously after his 15-year old daughter, while riding her motor scooter one rainy night, was struck by a car and, now, her life hangs in the balance under another surgeon’s knife. As he lingers just outside the operating room, he thinks back to another time about an adulterous young doctor, a vulnerable, uneducated woman by the name Italia and their love/hate affair in “Don’t Move.”  As Timoteo faces this new crossroad in his life as his daughter hangs between life and death he remembers another juncture 15 years ago. While driving through a dreary suburban town, his car breaks down. This was a time before cell phones were popular and the doctor can’t find a telephone to call for help. A trashily dressed, overly made up young woman offers to let him use her telephone. He repays the woman’s kindness by attacking and raping her then, abruptly, leaves. Timo can’t get the vulnerable Italia out of his mind and, repeatedly, returns and has his way with her, leaving money as one would a common prostitute. But, as he goes back to his sterile marriage with Elsa (Claudia Gerini) after each visit, he increasingly has thoughts only for Italia. His passion for the strange young woman causes Timoteo to decide to leave his wife until she breaks some important news to him – Elsa is pregnant.  Timoteo is forced, out of loyalty, to stay with his spouse and soon-to-be-born child. The conflict, desire, confusion and emotional upheaval that Timo experiences are palpably drawn, in front of and behind the camera, by Castellito. Penelope Cruz gives a powerhouse performance as the melancholy, vulnerable, oddly beautiful Italia.