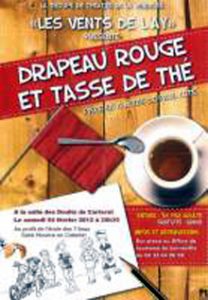 A desperate family with both mother and daughters unemployed searches for a way out. One of the girls, Charlotte, is a far-left activist but her sister offers her a job as a paid extra at a right-wing political meeting. For the money she reluctantly accepts, she finds herself injured in a scuffle that makes her a heroine and a victim of intolerance and indiscriminate political violence. Everyone reacts to her situation including Fernand the picturesque neighbor and his wife Rinette, the biker priest, Titine, who is not afraid of anything, and her Swiss aunt who thought that she was paying for the studies that Charlotte never took.  Finally, pushed, manipulated, and subdued by all including Minister Grosse-Canne, Charlotte ends up agreeing to become the leader of a right-wing party which promises her a bright political future. It’s not the weather vane that turns, it’s the wind.