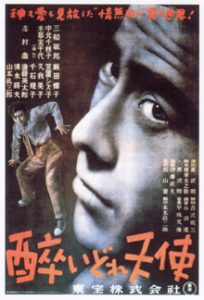 After a battle with rival criminals, a small-time gangster is treated by an alcoholic doctor in post-war Japan. The doctor diagnoses the young gangster’s tuberculosis, and convinces him to begin treatment for it. The two enjoy an uneasy friendship until the gangster’s former boss is released from prison and seeks to take over his gang once again. The ailing young man loses his status as gang boss and becomes ostracized, and eventually confronts his former boss in a battle to the death.  Set in and around the muddy swamps and back alleys of postwar Tokyo, Drunken Angel is an evocative, moody snapshot of a treacherous time and place, featuring one of the director’s most memorably violent climaxes.