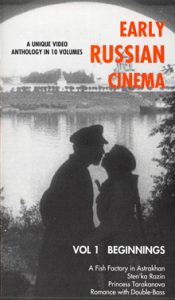 Films made by foreign companies, like Pathé’s A Fish Factory in Astrakhan, stimulated a demand for home-produced films which was finally answered by the enterprising Drankov. His Sten’ka Razin (1908) enjoyed immense success as the first Russian dramatic film. Pathé responded by increasing production at their Moscow studio, with art films like Princess Tarakanova (1910) and the first Chekhov adaptation, Romance with Double-Bass (1911).