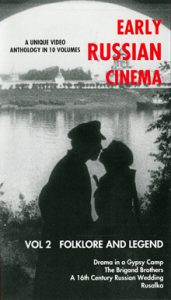 A compilation of four early Russian films produced between 1908 and 1912 by Russian cinema’s leading producer Aleksandr Khanzhonkov, and pioneer director Vasilii Goncharov. In a Gypsy Camp (1908) and the unreleased Brigand Brothers (1912) are folklore while A Sixteenth Century Russian Wedding (1909) shows the influence of history painting and The Mermaid (Rusalka) (1910) draws on French-style special effects to secure Pushkin’s legend.