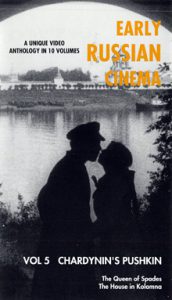 A compilation of two early Russian films produced between 1910 and 1913. Many Pushkin adaptations appeared during the establishment of the Russian film industry which helped popularise the author. Chardynin, former touring actor-manager gave Russian cinema a distinctly cultured orientation with his films The Queen of Spades (1910) and The House in Kolomna (1913).