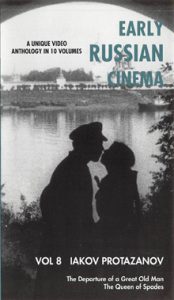 Protazanov, together with Bauer the leading director of the early Russian cinema, did not shrink from controversy in either his highly successful pre- or post- 1917 careers. The Departure of a Great Old Man (1912), about the last days of Tolstoi, provoked legal action by the outraged family. The Queen of Spades (1916) starred Mozzhukhin in one of his most compelling roles as Pushkin’s haunted hero.