A Munich Man in Heaven 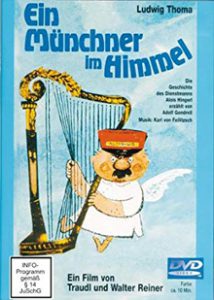 A Münchner (Aloisius) dies and goes to heaven where he’s forced to sing and play the harp and do all sorts of angel things which don’t suit him at all. He spends his entire time in heaven complaining about the lack of beer and schnupftabak (snuff) until finally God (or St. Peter) gets so tired of his grumpiness he gives him a job as messenger.  As such, he is charged with bringing divine counsel straight to the Bavarian government and is sent back to München. Arriving there, he immediately feels the familiar atmosphere of Munich, missed for so long, and he habitually walks into the Hofbräuhaus (Pub), enjoying his first Maß after such long time in exile. Since it tastes so very good, another one is downed, and another one, and another one… and for this reason, the Bavarian government is completely devoid of all divine inspirations to the present day.

Der Münchner im Himmel is a humorous satire by the Bavarian writer Ludwig Thoma, published in 1911. In it, Thoma treats the cliché of the typical Bavarian, especially the Munich grumbler, with a loving wink. In addition to the rascal stories, it is one of the author’s best-known works.