Eisenstein and Stalin: When Art and Politics Clash 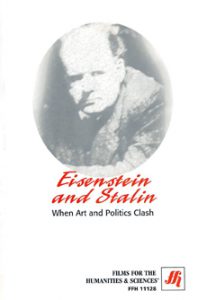 Call Number: RUSDOCE2
Alternate Title: Eisenstein and Stalin: When Art and Politics Clash
Year: 2000
Director: Films Media Group
Duration: 60 mins
Language(s): Russian
Subtitle Language(s): English
Drawing on sixty volumes of diaries and other recently revealed archival materials, this program presents the struggle between Joseph Stalin and Sergei Eisenstein, who fought for freedom of expression in a climate of exiles and executions. Rare clips of the preeminent Russian director’s controversial films-including the deleted Trotsky scene in October, the original ending of The General Line, and recovered footage from the banned Bezhin Meadow – and interviews with the director of the Eisenstein Museum, friends, associates, and former students underscore the coercive power of Stalin’s authoritarian regime.