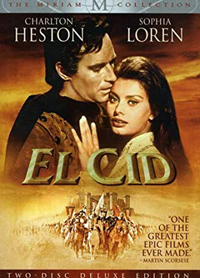 Spain is overrun by the Moors and the country’s only hope rests in a heroic knight known as El Cid (Charlton Heston). He knows a divided Spain cannot stand and implores his countrymen to unify in order to repel the invaders. But a hitch develops in El Cid’s campaign: He gets exiled from his homeland of Castile by the region’s power-hungry ruler. In the meantime, he attempts to reunite with his estranged wife, Jimena (Sophia Loren) — who’s still upset by the fact that he killed her father.  The film is loosely based on the life of the 11th century Castilian warlord Rodrigo Díaz de Vivar, called “El Cid” (from the Arabic as-sidi, meaning “The Lord”).  This version of the film is in English with no subtitles.